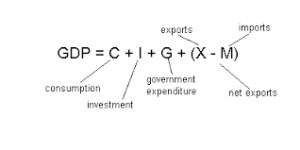 Have you ever wondered what it all means and how it applies to you?

You are probably thinking that you don’t really know what it is and most of it doesn’t apply to you anyway.

Well you would probably be right!  I want to discuss one particular figure in this post and why it doesn’t really have any bearing on you and the economy in general.

That figure is GDP.  What is GDP?  The diagram above pretty much explains how the figure of GDP is calculated.  But how useful is it really?  Particularly as a measure of how an economy is doing.

Firstly, GDP measures consumption, but not actual personal exertion.  So, if I mow my own lawn, wash my own car and cook my own dinner, it doesn’t get measured as a GDP figure.  The work that stay at home mothers do to look after their children is also not measured.  These are difficult figures to quantify.

However, if in a week I was to mow my neighbour’s lawn, and wash their car, and cook their dinner, and I charged them $100 for this service, and then they mowed my lawn, washed my car and cooked my dinner the following week, and they charged me $100, a figure of $200 would be added to the GDP figure.  But is the real economy actually better off by $200?  Would it be fair to say that, on the whole, probably not really.

Similarly, if everything a mother does in looking after children, feeding them, washing clothes, ironing, transporting them to their various appointments, was done by an external person who was paid, rather than unpaid by their mother, once again is the economy better off by that amount?  Once again, you would likely say, probably not.

And the biggest item of contention is government spending.  Governments only spend what they receive in taxes, go into deficit by borrowing it from overseas, or create money from thin air through money printing.  None of these actually contribute anything to the real economy.

Secondly, governments that spend money they don’t actually have by borrowing from other countries and going into deficit once again do not give a true indication of the productivity of the economy and the nation.

The same is true for stimulus or quantitative easing money printing exercises.  There is no real productivity in return for the extra money, so distorts the real output of a country and economy.

With this in mind, why do we still use GDP as a measure of how well, or not, an economy and country is actually doing?